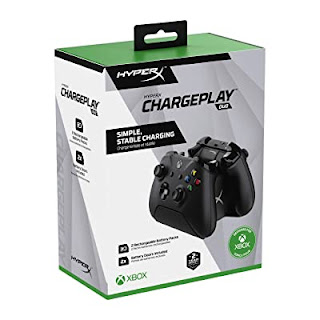 Back in January I bought a used Xbox One X on Ebay. The only thing missing was a charger for the controllers. I had a set of rechargeable double A batteries that I was using, but they only last a few hours before needing to be recharged again. It was getting worse and taking the fun out of playing games on the Xbox. I did some research and found that the HyperX ChargePlay Duo was the best one to get. It comes with two 1400 mAh rechargeable battery packs and battery doors for either the Xbox One or Xbox Series X/S Wireless Controllers. Charge time is 2.5 hours for a fully depleted battery.

The dual charging station from Power A only has 1100 mAh rechargeable batteries. You can find aftermarket battery packs as high as 2550 mAh on Amazon. The rating was 5 stars and the cost was only $19.99 on the one I looked at. But, I didn't want to remove the battery from the controller to charge it. I looked for a used HyperX online for several months. I did find a few, but the price for a used one was usually over $20 + shipping. You also take your chances buying a used battery charger. You have no idea how many charge cycles the batteries have had.

I was searching the web the other day and found that you can get a new Kingston HyperX ChargePlay Duo from the Microsoft Store for $29.99 with free shipping. Most other websites have it for a higher price or have a shipping charge. You can get it from hyperxgaming.com for $24.99, but there is an $8 ground shipping fee. Microsoft shipped mine UPS 2nd day air for free. I didn't think Microsoft would be the best option, but it looks like they are in this case. So far, the charger has been working well. Its nice to pick up a controller from the stand and know that it is fully changed and ready to go. Used Xbox One games are getting more difficult to sell. I think its because most Xbox gamers have an Xbox Live subscription. Microsoft is adding more older games to Xbox Live every month as a free download if you have a subscription. The Gold subscription is $9.99 per month and an Ultimate Game Pass subscription is $14.99 per month. The Ultimate subscription adds member discounts and in-game perks. For most multiplayer games, you need one of these subscriptions. Unfortunately, my budget doesn't allow for another $120 per year, so free game downloads and multiplayer gaming is not an option for me.

Posted by Budget Homepage at 3:52 PM No comments: 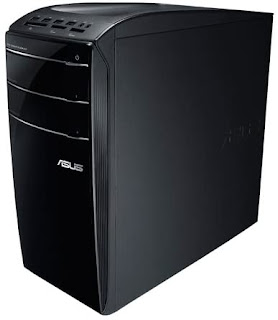 I finally found a nice, affordable windows 10 computer to replace my old Pentium 4 XP desktop. The new PC is an Asus Essentio CM6870 with an i5-3450 processor, 12 GB RAM, 500 GB HD, and an Nvidia GeForce GT 520 graphics card. This is a 9 year old PC that is replacing an 18 year old PC. The price for this CM6870 in 2021 was $125 including tax and shipping. I remember spending around $2400 for my first PC back in 1985. You can still spend that much, and more, for a PC with the latest hardware.
But, since I no longer play the newer PC games, this one will be plenty fast for my needs. The PC came with windows 10 Home edition installed. A new copy of windows 10 Home goes for around $40, so I think I got a fair deal. My only concern is that right after I bought the PC, Microsoft announced that Windows 11 would not support PC's without a Trusted Platform Module (TPM). This is a hardware security feature that was added to computer motherboards starting in 2011. The latest version TPM 2.0 was released in October 2014. So, basically Microsoft will not allow computers that are over 6 years old to run windows 11. Some people have already found a way to install Win11 on older PC's, but it requires replacing some of the installation files prior to running the install. As you can imagine this is not sitting well with people who have older machines. Microsoft announced that they are ending support for Windows 10 on October 14th, 2025. Windows 10 was first released on July 29, 2015. I expect Microsoft will have to support windows 10 for an extended period of time to prevent millions of computers from becoming e-waste.
There are several upgrades I could make to this PC. But with Microsoft not supporting older hardware, it doesn't make sense to put any money into this one. I don't feel any more secure, because hackers have had a lot of time to develop methods to bypass windows 10 security. At least I'm using an operating system that gets regular updates (for now). This isn't my first experience with window 10. We also have a 6 year old Asus M32 desktop with an i3-4160 processor. Even though the i5-3450 is two years older than the i3-4160, it is a bit faster because it has 4 cores vs. 2 cores and 6MB SmartCache vs. 3MB SmartCache. The Nvidia graphics card in the Asus Essentio seems to help render web pages better in Microsoft Edge than the on-board Intel graphics we are using on the Asus M32. I don't have to reload web pages several times before they display and function properly. A lot of web sites no longer work with window XP. Blogger.com was one of them.
Posted by Budget Homepage at 7:06 PM No comments: 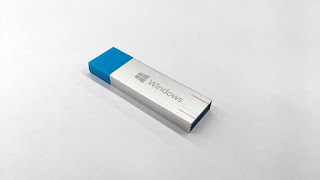 This past week, I was working on a hardwired smoke alarm in the lower level of my home. In order to connect the smoke alarm to AC power, I had to shut off power to the circuit. Since I was working downstairs, I decided to turn off the Windows XP computer I have down there. It took several tries to find the right power circuit to turn off, as the circuit box isn't marked very well. After the smoke alarm was connected, I went upstairs and found that power had also been shut off to some of the upstairs rooms.

One of those rooms had a PC running Windows 10. When I tried to turn the computer back on, it would not boot. I've always heard that you should shut your computer off during a thunder storm, well this is one of the reasons why. The computer would only go to the Bios screen with a warning that it couldn't find a boot device. At first the hard drive was making a buzzing noise, which indicates that the heads may be stuck to the platter. I opened the drive (not recommended) and saw that the heads were in the parked position. When I reinstalled the drive, it was now making clicking noises. This 1 TB Toshiba hard drive was done. We didn't have a lot of important data on the drive. But, its never fun setting everything up again.

This was our only Windows 10 PC. It is mainly used for web browsing, photo editing, email, webcam meetings, and printing. I decided to order a Samsung 870 EVO 250GB SSD for $44.99. Before the new drive arrived, I downloaded the latest version of Windows and tried to load it onto a 16GB USB stick. The problem I ran into was that the latest version of Win 10 (1809) has files that are too big to fit onto a FAT32 formatted USB drive. An individual file can not be larger than 4GB. I also found out that Windows XP cannot format a USB drive to NTFS. The only option is to install exFAT support on XP with update KB955704. Since Microsoft ended support for XP in 2014, you can no longer find the update file on their website, but it can be found elsewhere.

I proceeded to format the USB with exFAT and was able to copy the necessary installation files to the drive and verified that it was an MBR bootable drive. When the SSD arrived, I installed it, inserted the USB drive, and pushed the power button. The computer recognized the SSD and was attempting to read the USB drive, but then went back to the Bios screen. I tried adjusting the boot settings to legacy mode, but nothing worked. My last resort was to use an unopened retail version of Windows 10 Pro that I had been saving to upgrade my old XP computer. I opened the package and found what looked like a disposable USB (see photo). I inserted the USB into the computer and it started the installation process.

During the load, I did not setup WiFi access. My concern was that it was an older version of Windows 10, which would require a lot of updates. I had also read that a retail version of Windows would not activate automatically and I didn't want to use my activation code on this install if I didn't have to. After Windows was installed, the next thing I did was insert the USB I made with the latest version and reinstalled Windows again. Windows 10 had no problem reading the exFAT formated USB drive. After the second install, I turned on WiFi and logged into my Microsoft account. There were only a few updates and the software activated automatically. Since then, the computer has been running well and I've been using the Microsoft Edge browser instead of Google Chrome. The Edge browser has undergone a lot of improvements since I last tried it.

Posted by Budget Homepage at 9:48 AM No comments: